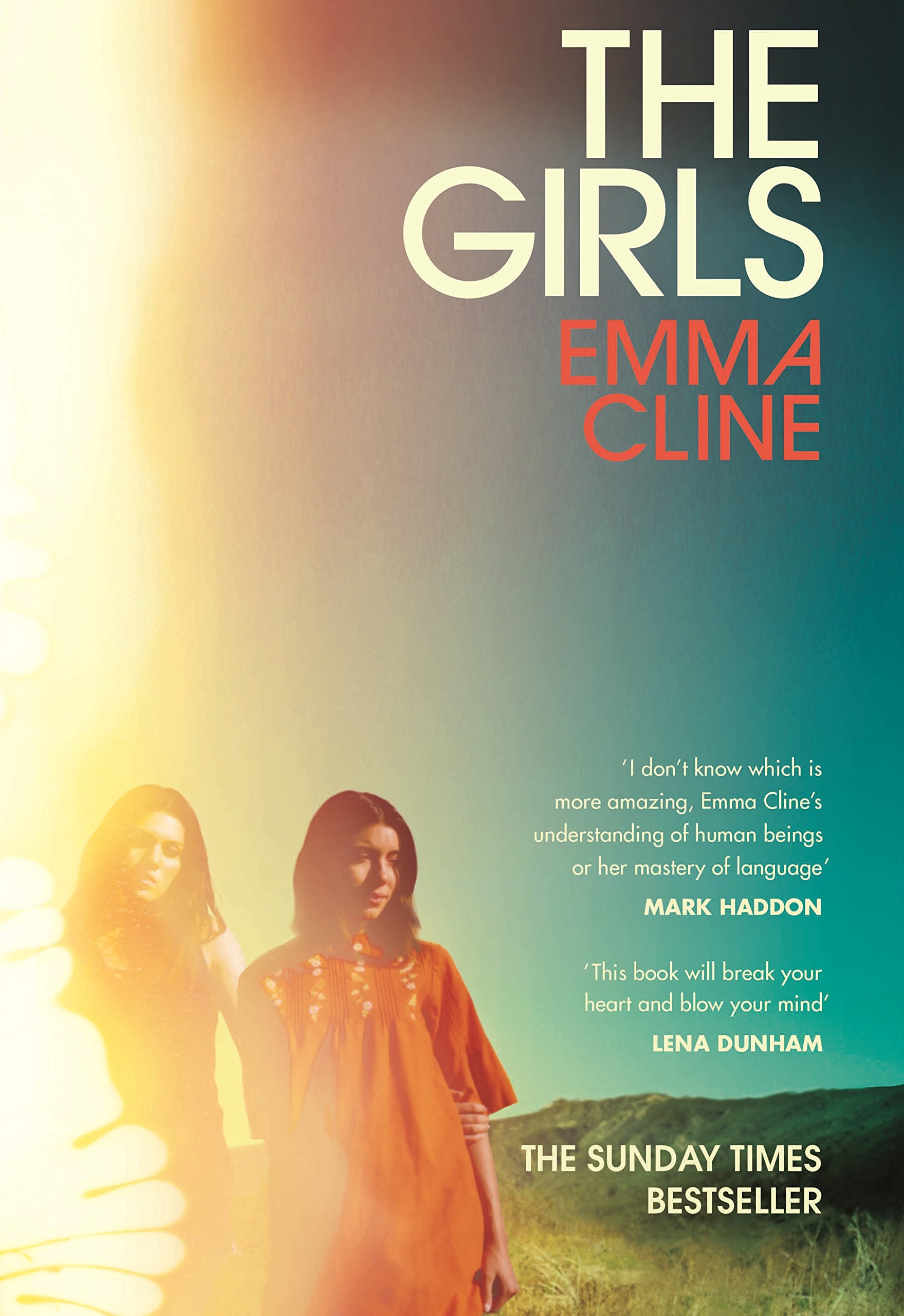 This was not the book I expected it to be, but maybe that’s a good thing. I’m not a cult enthusiast like some potential readers may be. My interest is purely based on what Karen and Georgia of My Favorite Murder fame have fed to me. So I’m not sure what I was expecting, but I think it might have been a bit more wacky and psychedelic than the actual gritty and just downright depressing narrative I ended up with. Even though it wasn’t what I expected, it was still pretty good in an oh-no-what’s-happening kind of a way.

Based on my limited knowledge of cults and their history I think the one depicted by Emma Cline was heavily inspired by the Charles Manson cult, and the murders it’s members committed. Russell, the enigmatic and charismatic leader, is an aspiring singer songwriter. He has amassed a cult (literally) following of young fans, mostly girls, who truly believe Russell is destined for great things and will change the world with his music. Cline expertly documents how quickly adoration and obsession can spiral into complete obedience and truly destructive behaviors.

Though this book may have been sold to me as a gory, dramatic cult story, I thought it could equally be re-branded as a coming of age, sexual awakening story. Our protagonist, Evie, is a preteen when the cult comes to town and she becomes obsessed with one of Russell's girls, the mysterious and beautiful Suzanne. As the story unfolds, Evie tries to untangle her feelings for Suzanne. Are they those of complete admiration and jealousy? Or are they deeper feelings of attraction, or even love? Evie has a plethora of first sexual experiences, ranging from participatory and enjoyable to non-consensual and abusive. Through her eyes we see her try to come to terms with the trauma and pleasure that comes with them, as she figures out herself and what she wants. We can contrast Evie’s relationship with Suzanne with her relationship with Connie, a childhood friend. Evie is a pretty awful friend to Connie, abandoning her as soon as something more exciting, more grown up comes along. In comparison, her relationship with Suzanne is obsessive and all-consuming. She would probably do anything for Suzanne.


Evie’s experiences are not unique, the novel contains quite a bit of unsettling sexual abuse. But interestingly, in light of the #metoo movement, it’s nothing that would hold up in a court of law as rape. None of the girls are held against their will, they don’t scream, struggle or fight back. None of Evie’s assaults have the hallmarks of what a court would perceive of lack of consent. But to call them consensual would be a gross misrepresentation, and wouldn’t take into account the power balance and the pressure the girls were under to sexual gratify the men. In a way it reminded me of the sex in Louise O’Neill’s Almost Love, in which she describes women being complicit in their own degradation. The girls in Russell’s cult take part in sex and allow themselves to me abused because they feel that that’s the only way they will be allowed to stay where they feel they belong. They put up with the abuse and mistreated because they feel the will be cast out if they don’t. They feel they have no alternative. This is all without even mentioning that a lot of the girls abused by Russell are underage, and that’s statutory rape no doubt about it.


As in her description of sexual abuse, Cline doesn’t shy away from exploring the power men have over women. She explores it to various different degrees through different relationships. Russell has total control over Suzanne. She would do anything for his approval and love, and ultimately murders for him.(This isn’t a spoiler it’s mentioned in pretty much the first chapter so I’m not sorry.) Evie’s parents and Evie’s father and his girlfriend also have a really unhealthy power imbalance in their relationships. Evie’s mother puts up with her husband cheating on her, and when he eventually leaves her for his girlfriend she completely loses herself. Taram and Evie’s father have a slightly more equal relationship, putting the age difference and the fact he’s her boss aside, in that Taram seems less likely to put up with Evie’s fathers shit.


All thematic features aside, my favourite aspect of this book was the aesthetic that Cline creates in the North California setting. I feel like the cover is perfectly done to represent this vibe. The blue, blue sky, the orange and yellow lens flare and the almost dusty, grainy quality of the photograph all screams a stifling hot California summer. Cline really captures the oppressive, lazy quality of the heat and it permeates the mood of the narrative. This story couldn’t have played out anywhere else but an abandoned ranch in the hills of north California. This setting is in striking contrast to the violent and disturbing aspects of the narrative. It’s jarring to imaging such vile acts taking place in the lazy heat. Some of the descriptions are not for the faint of heart and I found myself speedreading some sections willing them to be over. If you're not one for grisly depictions of violence, there are parts of this book you will find distressing.

All in all I thought The Girls was an interesting, realistic and gritty depiction of obsession, abuse and power and is worth a read if you have a strong stomach.

I picked up Crazy Rich Asians after seeing the trailer and feeling intrigued. It struck me as kind of Singaporean Gossip Girl, and I loved GG so I was keen to dive right in.


I’ll get my pet peeves out of the way at the beginning because it’s all praise after this. Sometimes this book reads like Vogue, there are constant descriptions of what the characters wear and who it was designed by. And I just don’t care. I understand that Kwan was using it to illustrate how fashion is used to distinguish the elite and how their obsession with wealth manifests itself in their obsession with clothing, but he could have dialed it down and still got his point across. Also I felt like there might have been too many characters, introduced extremely briefly, all kind of similar to each other (there are about 500 aunts and I couldn’t keep them straight)


Other than that I really liked this novel. Kwan has done such a good job of creating some really realistic and surprisingly relatable characters. I don’t know anyone as rich as the characters in this book, but I know some fairly rich ones who are pretty intolerable so I can only imagine what people who are set to inherit a couple hundred mil are like. But not all of the Singaporean Chinese are terrible people, obviously, some of them handle their extreme wealth with grace and subtlety.


Kwan explores the way that wealth affects these people and their relationships. Nick, Eddie and Astrid are three cousins, almost as rich as either, who grew up together and turned out very differently. Nick is well adjusted, has a really healthy relationship with his girlfriend, our protagonist, Rachel (apart from lying by omission about his horrifically rich family). Astrid, a socialite and It girl, is married to the man she loves but her wealth but considerable strain on their relationship. Eddie is obsessed with his wealth, how much of it he has, how he can show it off and why his parents won’t, and ends up at odds with his relatively down to earth wife, Fiona.


Crazy Rich Asians is very interesting class study about how people with this extreme wealth behave and a fascinating insight into the strata of Asian society, something I knew nothing about. I found it intriguing that the families with the most wealth often go to great lengths to hide it, which seems extremely at odds with the behavior of their peers. (See:every rich person since the beginning of time). But much like the British landed gentry, a class system I’m much more familiar with, they are extremely snobby and condescending towards other social groups (especially the mainland Chinese and anyone with ‘new money’). Their social circle is rife with ‘inbreeding’, as it’s considered improper to marry outside of the Singaporean Chinese class. After all, the money must be kept in the family.


Crazy Rich Asians gives a unique perspective on Asian society that is never represented in the media and it’s characters defy most if not all of the stereotypes that Asian people are often saddled with in the media.

What if the power to hurt were in women's hands?Suddenly - tomorrow or the day after - teenage girls find that with a flick of their fingers, they can inflict agonizing pain and even death. With this single twist, the four lives at the heart of Naomi Alderman's

The question I kept asking myself as I read The Power was “Is this a feminist book?”. It was certainly sold to me as one, though as it unfolded, the narrative turned out to be a lot more complex than the female empowerment I expected.

If you wanted to read this as a misandrist handbook you probably could. Over the course of the novel as we see societal power shift from men to women, the women become even more ruthless and cruel than we expect from “the weaker sex”. This is the central point of the novel, there is nothing inherently evil about the group that holds the power, but power corrupts it’s holder. In this way this novel is more of a thought experiment than a story, what would happen if the power structures in society shifted to favour the women? Is there anything inherently peaceful about women, or is it there lack of power that allows them to take the compassionate, gentle role in society. Do women only behave this way as a foil for men, and is the submissive group always considered peaceful? The narrative illustrates that it’s quite easy to argue the “superiority” of one gender once that gender holds the power, of course they are better, because they wouldn’t have all the power if they weren’t? The “Power” eventually leads gendered violence against men. By exploring rape, Alderman examines the theory that rape is less about sexual desire, and more a display of power, dominance and a way of oppressing and controlling the weaker group.

Alderman also uses some unusual ways to drive home the huge cultural shift that occurs before and after the cataclysm. The correspondence between “Naomi” and “Neil” ,book ending the narrative, about the book he’s writing is jarring. We are not used to hearing women talk to men in this way, the condescending language that Naomi uses when critiquing his work is usually reserved for women in the workplace. The novel is also dotted with drawings of found artifacts, thought to be used by women and girls training their power.

As interesting and thought provoking as the book is, it does require the reader to suspend their disbelief for a few key points. The skein made absolutely no scientific sense to me. How does it work? Where does it comes from? Why did women lose this power and why did it come back? The voice in Allie’s head also really frustrated me. What was it her mom, the Mother, mental illness? If this was cleared up in the book, I must have missed it.

“The Power” is unlike any other book I’ve read. By taking societal norms and flipping them it creates an unnerving and disconcerting narrative exploring gender violence and dominance. It’s no “The Handmaid’s Tale” but is a worthy member of the modern feminist canon.