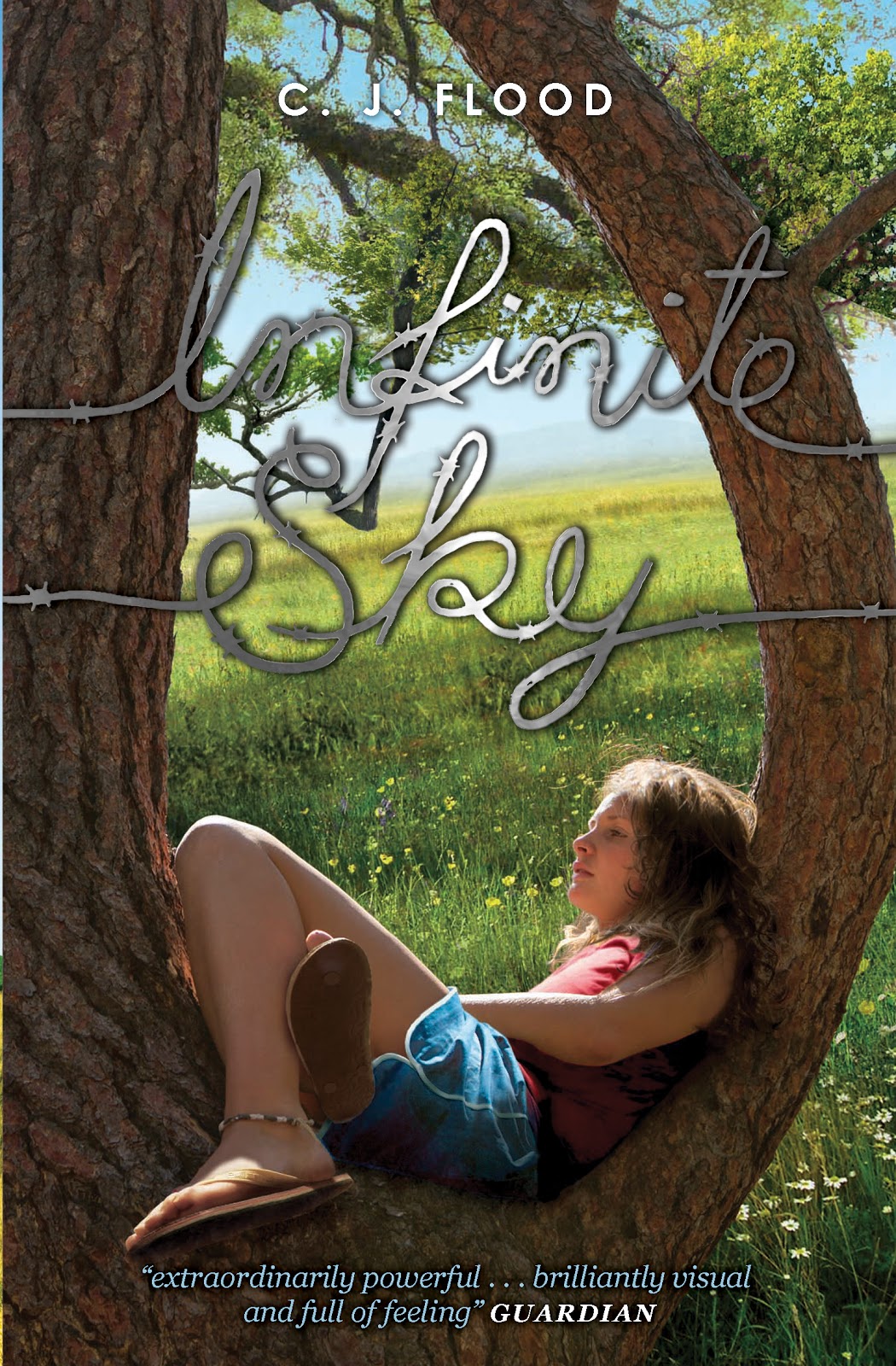 When Iris' mum leaves home, her brother, Sam, goes off the rails and her dad is left trying to hold it all together. So when a family of travellers sets up camp illegally in front of their farm, its the catalyst for a stand-off that can only end in disaster. But to Iris it's an adventure. She secretly strikes up a friendship with the gypsy boy, Trick, and discovers home can be something as simple as a carved out circle in a field of corn...

I had heard so much about Infinite Sky from numerous different booktubers, so I was delighted when I managed to pick up a copy up from the library. In her novel, Flood deals with Irish travellers in a very unusual way. As the story begins travellers move into the field beside beside our protagonist Iris’ house, just as her mother moves away, and her life is never the same again.

One of the strongest and most interesting aspects of the novel is the broad range of characters presented by Flood. None of the characters conform to our preconceived ideas of these characters. Iris is a pretty unique protagonist. I would consider this a YA novel, but Iris is not the typical age of a YA protagonist. Iris is about fourteen or fifteen, and she greatly reminded me of Melon, the protagonist in Red Ink by Julie Mayhew. Except that Iris is a bit of a flat character, without the individuality and unique voice that made me love Melon

The book begins with the excellent premise that someone Iris loves is going to be killed by someone else she loves. Now I don’t know about you, but this was enough to hook me. This prologue kept me intrigued all the way thought the book until the actual event, even if I had figured out what would happen long before it did. Conversely, I’m not sure if the plot would have been enough to hold my attention without this bombshell at the beginning. It kind of moseys along before picking up right before the very end, so I’m glad I stuck it out, but I can’t help but feel that Flood told us the end to keep us interested, you know… like the way the do in Revenge.

The plot of this novel reflects real life as there is undeniable and destructive tension between Iris’ family and the travellers that move into the field beside their house. The travellers do not live up to society’s expectations of them, and turn out to be pretty decent people. More decent, in fact, than Iris’ own family. As Iris’ friendship with Trick grows , she becomes more and more torn between her loyalty to and love for her family and her disgust for their actions. Iris is so young and it was quite painful to watch her agonise over this very serious issue that no young girl should have to deal with.

Travellers are presented in quite an open minded and unbiased way in this novel. As I sort of grew up with travellers and went to school with quite a few I was extremely familiar with traveller culture, so while the way travellers are presented in the novel is different to the way they usually are in the media, I wasn’t too surprised. I imagine it would be a hugely enlightening read if you were unfamiliar with traveler culture , and it will definitely open your mind to this group of people.

There are a few interesting characters in this novel including Sam, Iris’ brother , Iris’ mother and Iris’ best friend (Mattie? I think, I’m going to go with Mattie, I didn’t write her name in my notes and it’s been a while… ). Sam is definitely an interesting character, but not a likeable character. He had the potential to be likeable, when Iris reminisces back to the time before her mother left we see glimpses of a much better Sam. He is definitely the most complex character and my feelings for him fluctuated between feeling sorry for him and being truly aggravated by him. Iris’ mother is also pretty interesting. To me, she embodies the debate whether or not a parent’s primary responsibility is to their children, and how much can parents let a broken marriage affect the children of the relationship. Iris’ best friend Mattie (correct me if I’m wrong) is a massive pain in the ass, and reminded me of Chick from Red Ink ( again ), so watch out for her.

Overall this was a pretty solid novel and it was no chore to read it. Objectively it was really good, but for some reason it didn’t click with me. I would definitely recommend it to anyone who who enjoys YA contemporary with a bit of bite and doesn’t mind shedding a few tears.
Objectively : Four Stars ****
Personally : Three and a half stars
Posted by Eimear Mulligan at 01:32