Anna is looking forward to her senior year in Atlanta, where she has a great job, a loyal best friend, and a crush on the verge of becoming more. Which is why she is less than thrilled about being shipped off to boarding school in Paris--until she meets Étienne St. Clair. Smart, charming,beautiful, Étienne has it all...including a serious girlfriend.
But in the City of Light, wishes have a way of coming true. Will a year of romantic near-misses end with their long-awaited French kiss?

To be completely honest, I avoided this book for a long time. Firstly because of the awful, awful, awful title, and secondly because of the equally awful cover. So what changed? Basically every book tuber I watch recommended it , and they changed the awful cover. And so I decided to give it a go. It’s important to specify that I gave this such a high rating because it is one of the best YA romance novels, not because it’s one of the best novels. In comparison to Pride and Prejudice , it’s more of a three. But it’s not trying to be P&P, so it gets five. I actually read this book twice, it’s an easy, really enjoyable read, perfect if you’re looking for something light. It’s actually quite a long book, and I’m not sure if it had to be. I think Perkins may have been trying to stretch it out Harry Potter style so the finale happened at the end of the school year. Perkins’ writing is pretty good. It flows and makes the story very easy to read.

Anna is a reasonably good protagonist, meaning that should doesn’t make me want to shoot myself with frustration. Anna claims to be a film buff, and she wants to be the next big film critic, but despite this it never occurred to her that Paris might be the heart of cinema. I mean France is basically the birthplace of film, even I knew that. But thankfully, she’s not an aspiring writer like every other protagonist I seem to read about. Poor Anna is a lower middle class girl who doesn’t want to be sent to a fancy school in fancy Paris for the experience of a lifetime because there is a boy she might sort of like back at home. This nearly made me strangle her, it is such a first world problem it hurt my soul. But to be fair to Anna , a few chapters in she admits it’s not moving to Paris she’s pissed about, it’s the fact she had no choice. And that made me want to kill her lee. Apart from that, Anna’s pretty solid. Sure she makes mistakes, but don’t we all.

The real problem character is Étienne St. Clair, the artistically messy, yet super-clean, fascinatingly academic and adorably short American-English-French boy. First of all , his name is horrendously stereotypical. Secondly, why does he have to be three different nationalities, why can’t he just be two? Three is a bit excessive. St. Clair is that annoying Hugh Grant-style character who can only exist inside the universe of a rom-com. I was torn between being absolutely in love with him, and absolutely exasperated with him. He is not a real boy, but I don’t think the love interest in a YA romance can be a real boy.

The best part about of Anna and Étienne’s relationship is their friendship. Normally in YA novels the girl just pines after the guy, until he deems her worthy enough, but Anna and Étienne are actually friends, which is refreshing. Unlike other books, Perkins doesn’t only deal with Anna’s romantic relationship , but also her friendships. Anna struggles with her friendship with Brigette, from Atlanta, and her new friends Rashmi, Meredith and Josh. Anna can be a pretty awful friend, but she does try to atone for her mistakes.

Anna and the French Kiss is the best YA romance novel I’ve ever read. It’s a really strong book in quite a weak genre. It may not be deep and some of you may even find it painful, but it may also make you squee with it’s cuteness and adorableness. It will also make you want to go to Paris so badly. Maybe for my erasmus, if I get my act together. 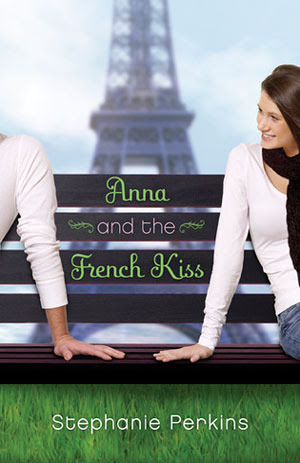 This is the old cover. (I bet you all agree with me now.)
Posted by Eimear Mulligan at 06:55