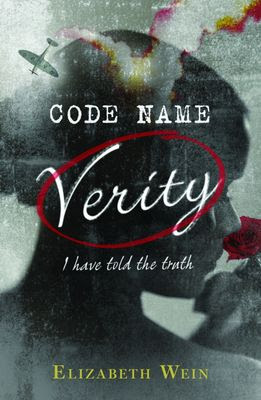 Two young women become unlikely best friends during WWII, until one is captured by the Gestapo. Only in wartime could a stalwart lass from Manchester rub shoulders with a Scottish aristocrat, one a pilot, the other a special operations executive. Yet whenever their paths cross, they complement each other perfectly and before long become devoted to each other.But then a vital mission goes wrong, and one of the friends has to bail out of a faulty plane over France. She is captured by the Gestapo and becomes a prisoner of war. The story begins in “Verity’s” own words, as she writes her account for her captors. Truth or lies? Honour or betrayal? Everything they’ve ever believed in is put to the test…

I feel I may be in the minority of people who don’t adore this book. That being said, I did like this book. Maybe because my expectations were so high that the actual book couldn’t live up to them, because on paper everything about this book was perfect, but I just wasn’t feeling it.

I found the story slow to begin with. Unlike other readers, I wasn’t gripped from the first page. I found it difficult to connect to the characters and the story for the first hundred pages at least, even though I can’t put my finger on why. I found the format confusing as well. The first part is told in the past and present tense, and Verity refers to herself in the first and third person which I found really confusing for a while before I got used to it. The second part of the novel, I found much easier to read, because of it’s format (it was all in first person, past tense). While Wein’s writing is technically good the majority of the time, I found it difficult to read sometimes because of all the technical language surrounding the different types of planes. I’m not interested in any of this at all, so I skimmed over it all. However, if you are interested in planes then this is perfect for you. You can almost tell the author is a pilot, there is so much information in the book.

Now for the positives. This is primarily a story of friendship , which I found undeniable refreshing. Verity has a wonderful line along the lines of “It’s a bit like falling in love, finding your best friend.” I feel like there is a huge hole in YA literature ( Is this YA, it could easily also be adult) where female friendships should be. YA lit spends way too much time on romantic relationships, when friendships are just as important. Maddie and Verity are also fantastic characters. I know that the term ‘strong female character’ is thrown around a lot, but I feel that if it should ever be applied, it would be applied to these two girls, primarily because of their independence, strong will, and their refusal to be defined by the men around them. One of the main things I loved about them was though they are badass, they are still women. They don’t sacrifice their femininity, but they don’t use it either. They are thoroughly admirable characters.

Plotwise this book is pretty excellent. It is suspenseful, captivating and keeps up momentum the whole way through, especially in the second part. I would have loved to have heard more about Verity’s missions, they were skimmed over and only the vaguest details were supplied, which kind of annoyed me, but maybe it just wasn’t the authors area of expertise. That ending though, I did not see that coming. It was well worth hanging on for that ending, I didn't think it would make me as emotional as it did, but it was like a punch to the gut. There were some upsetting scenes which I had to skim over because I just don’t have the constitution for that kind of thing, so if you’re super sensitive to violence, you should be wary of this going in.

I would recommend this to anyone who likes historical fiction, especially anyone, who like me, is a sucker for WW2. I hate to say that I didn’t like this as much as everyone else seemed to, but if I did that would be a lie. I did really enjoy it though, and was glad I stuck with it.