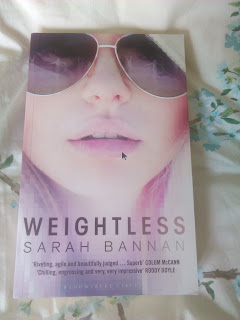 When 15-year-old Carolyn moves from New Jersey to Alabama with her mother, she rattles the status quo of the junior class at Adams High School. A good student and natural athlete, she’s immediately welcomed by the school’s cliques. She’s even nominated to the homecoming court and begins dating a senior, Shane, whose on again/off again girlfriend Brooke becomes Carolyn’s bitter romantic rival. When a video of Carolyn and Shane making out is sent to everyone, Carolyn goes from golden girl to slut, as Brooke and her best friend Gemma try to restore their popularity. Gossip and bullying hound Carolyn, who becomes increasingly private and isolated. When Shane and Brooke—now back together—confront Carolyn in the student parking lot, injuring her, it’s the last attack she can take.

Sarah Bannan's deft use of the first person plural gives Weightless an emotional intensity and remarkable power that will send you flying through the pages and leave you reeling.

Weightless is one of those books I wish I had read when I was fourteen. It’s one of those books that should be on recommended reading lists for school because it’s just that important. I feel like it should be made into a movie because then more people would hear this story, but I just know they’d ruin it. It’s a perfect little heart-breaker of a book and I recommend it to everyone who has ever or will ever be a teenager.

Weightless is set in Adamsville , Alabama, a small tight-knit, religious community. New-comers are few and far between, generation after generation of native Adamsvillian have lived there and there seems to be a sort of segregation between blacks and whites. Adamsville seems to be a stereotypical southern town, enhanced by the descriptions of the stifling and oppressive heat that you just don’t get in Ireland, but really gave a sense of setting. Adamsville is a Christian town, Baptist to be more specific, and Adamsville High is a Christian school. They pray before football games, they pray for the football team at church. Everything is wholesome, there’s no alcohol, no sex. Everyone is a Christian, but no one acts very christian at all.

Obviously the main issue dealt with in this book is bullying and the role technology plays in bullying in the twenty first century. The whole technology aspect was nothing new to me, after all, this was the culture of bullying in grew up with. But I’d say it’s a shock to the system for any adults reading this book who thankfully managed to avoid the era of cyber bullying. It’s much easier to dehumanise someone online than face-to-face, but the  stuff said about Carolyn isn’t anything worse than Brooke, Gemma and co. would say to her face. More importantly, the internet is used to send videos and photos of Carolyn, and mobile phones are used to make sure that Carolyn can’t even escape the bullying when they leave school. And it seems like the internet has ushered in an era with no privacy. Everything is recorded, with the other students taking photos and videos of Carolyn without her knowing. The narrators see no problem in looking through Carolyn’s bathroom cabinet and gym bag, and then telling everyone what they saw.

There is a trend within the narrative of passive aggressive bullying escalating to violence and abuse. While it starts off fairly “innocent” , it ends up with the sort of behaviour adults get prosecuted for. But the whole time it’s passed off by the other students as normal behaviour, or banter. If I had a euro for every time I hear “You need to learn how to take a joke” used as an excuse for picking on someone, I’d be a rich woman, and in Weightless it’s used as a way to make excuses for bullying. Similarly, nobody takes the suicide attempts of Carolyn or “that girl at Lincoln High” seriously. They are seen more as a cry for attention, that the girls are being dramatic rather than exhibiting symptoms of emotional distress or depression. I remember people saying stuff like this when I was at school , and may have even been a culprit. And obviously the book goes on to show how dangerous ignoring and downplaying these acts can be.

To me, what Bannan actually does really well here is showing the motivations and causes of the bullys’ behavior. There’s an old theory that parents and teachers tell you, that you don’t believe when you’re thirteen  but you realise is true when you get older and look back , that only unhappy people pick on others. In Weightless , like in real life, bullying comes from a place of insecurity. Brooke is ashamed of her weight, Gemma knows everyone thinks she’s stupid, and Taylor and Tiffany are desperate to cling onto the bit of social standing they have. Everyone has their own issues, and as well as trying to build themselves up they tear everyone else down. At one point Carolyn asks why don’t they just leave her alone if they hate her so much, but tearing Carolyn down is just a cruel way of making themselves feel more superior.

Bannan also touches a little on slut shaming and casual sexism. After another student takes a video of Carolyn and Shane having sex in his car, Carolyn suffers all the backlash , and Shane gets away with a flawless reputation. It’s amazing that only one of them gets ridiculed and blamed it takes two to tango, but are we really that surprised. The Adamsville hotlist is another great example of both casual bullying and sexism. Firstly, there’s no list for the guys, and secondly there’s obviously something inherently cruel in ranking girls based on their attractiveness.

As the title suggests, a lot of the heartbreak in this book is caused by weight. All the girls think they are fat, all of them want to be smaller. Both Brooke and Carolyn have eating disorders, and while the narrators don’t , they still spend a lot of time and energy worrying about their weight. The girls are obsessed with being small, nearly every time Carolyn is mentioned they reference her weight, if she has lost or put on any. Every time she is mentioned with Shane , they talk about how tiny she is compared to him, how he eclipses her. They seem to want to shrink themselves, to take up as little space as possible.

Weightless is written in the first person plural, which adds to the whole bystander syndrome of the situation. Nobody does anything to help Carolyn because, well nobody else was doing anything to help her, and everybody feels ok with tormenting her, because everyone else is doing it too. It also helps encapsulate the joined-at-the-hip herd mentality of teenagers. It’s the first book I’ve read written by this point of view and I found it a really interesting way to tell a story.  Bannan also uses things like facebook posts, text messages, Carolyn’s essays, reports and transcripts of conversations, which all added to the story.

This is a heartbreakingly wonderful book that isn’t getting the recognition it deserves. Read this book, just do it.