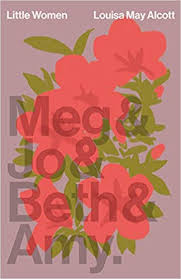 I, like a million other women, decided to read Little Women for the second time, after seeing the new adaptation twice in cinemas last year. I had read the first half of the book as a child and was slightly underwhelmed. It wasn’t as exciting as Harry Potter or Artemis Fowl and I didn’t really understand what all the fuss about it was. So when I went to see it in theatres, the decision was by my love of Greats Gerwig’s film Ladybird, rather than any childhood nostalgia.

I’m not entirely sure why the second half of this book (Little WIves) is considered a children’s book. I enjoyed it more as an adult than I did as a child, and I think it would have been totally lost on me
had I read it when I was younger. As a kid I really identified with Jo, the bookish, tomboyish sister,
but reading it again as an adult I found myself relating a lot more to Meg and Amy. Both Meg and
Amy are the more annoying sisters, they both hate being poor, unlike Beth who suffers it gracefully,
and they don’t ever make sacrifices for their family like Jo. In hindsight, I didn’t identify as Jo, I just wanted to be her. Now I’m a bit older and have dabbled in a bit of self reflection, I’m definitely more
of an Amy. The first half of the book is very soothing, apart from the scarlet fever incident, while the
second half is a lot more action packed and engaging.

Little Women is certainly a book of it’s time. Gerwig has recently given it a twenty-first century
feminist makeover, and while 99% of what she has put into her film is drawn from the book, what
she leaves out dramatically changes the tone of the book. Little Women, is progressive and
feminist for it’s time. I can only imagine how groundbreaking the book must have seemed in
1868, and how empowered and inspired it’s readers must have felt. But reading it through the
lens of the place of women in the twenty-first century, it all felt a little twee. Alcott's feminism
allows women opinions and passions, it allows women to lament their economic position and
opportunities. Her characters are fully fleshed out human beings, the women and girls are allowed
to have flaws and personalities, instead of just existing as flat domestic props. However, Alcott
still espouses traditional gender roles, the three surviving sisters all end up married with children.
None of them remain unmarried and support themselves, even Jo, who for a while looked like she
was going to be a self sufficient writer. Instead Jo marries her old man husband (I actually don’t
have a huge issue with the age gap in their relationship, and was almost annoyed with Gerwig
dramatically aging Bhaer down in the film), and surrounds herself with little boys, her own children
and her new students. I found it a bit disappointing to be honest. Alcott herself didn’t end up
married, so it wasn’t like it wasn’t a possibility for women at the time. By ending the book this way,
and maybe I’m reading too far into it, Alcott seems to imply that the only worthwhile way for a
woman to end up is marriage and motherhood, or to die young and innocent.

Little Women also contains a lot of God talk. I found this very understandable, the vast majority of
the Marchs’ real life contemporaries were Christians, and therefore based their moral code around
the teachings of Christianity. However, I just found it incredibly unrelatable and a little aggravating.
Nowadays most of the people I encounter using their faith to teach me about morals, they are
usually doing so with the end-game of stripping women of their bodily autonomy and sexual
agency. So yeah, I’m a little biased against people who base their moral code on Christian beliefs.
Little Women is a preachy book, but of course it is, it’s a children's book aimed to help young girls
prepare for marriage and children. And for it’s time, what it preaches isn’t unwise or unhelpful.
However, I found the sermons and lectures the characters inflicted on each other a bit painful
and heavy handed.

My personal favourite aspect of the book was the deep dive into the Jo-Laurie-Amy ‘Love triangle’.
When I watched Gerwig’s film I was convinced that Laurie was still in love with Jo even after he had
married Amy. In the book, the changing nature of their relationship is much better developed, and
we get to see Laurie getting over Jo and falling in love with Amy much more clearly. Jo’s relationship
with Professor Bhaer is a lot more understandable, and even though he’s way too old for her by
modern standards, thei love, mutual respect and shared values are quite transparent, and honestly
made me root for them to end up together.

I’m glad that I eventually got around to reading Little Women. I found it a surprisingly soothing
quarantine read, filled with characters you can really care about.