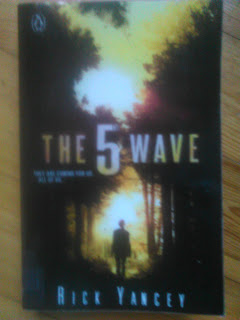 The 1st Wave took out half a million people.

The 2nd Wave put that number to shame.

In the 4th Wave, you can't trust that people are still people.

And the 5th Wave? No one knows. But it's coming.

On a lonely stretch of highway, Cassie runs. Runs from the beings that only look human, who have scattered Earth's last survivors.

To stay alone is to stay alive, until she meets Evan Walker. Beguiling and mysterious, Evan may be her only hope.

Now Cassie must choose: between trust and despair, between defiance and surrender, between life and death.

I found The 5th Wave kind of hard to get into , I’m not super into alien invasion stuff in general, but once I did, by God was I hooked. I would recommend this to everyone, especially people who like sci fi, but also to those who don’t.

While our lead character is Cassie, who also read from several other character's points of view. I found that this really rounded out the narrative. It stopped the plot from suffering from that very insular narrative style that the hunger games has. Like with Katniss, we get Cassie’s point of view, but unlike in the Hunger Games we get to see what is going on outside of Cassie’s sphere of consciousness which really adds to the overall tension and action of the novel. The novel is mostly narrated by Cassie , but we also get a lot of “Private Zombie’s” point of view, and some other characters.

To me this was most definitely a war novel, based around the survival of the fittest. Without giving too much away, I felt the novel raised so many really important questions like what would we be willing to do to survive?, when is it time to give up? , is it ever time to give up?, and is it worth fighting when you’re on your own? These are absolutely terrifying questions that I hope I will never have to know the answer to, but it’s horrifying to think that so many people throughout the course of history and even today had to ask themselves these questions. The conditioning of child soldiers plays a huge part in this story, as it does in real life wars. In the novel we see the practice of training the children when they are young, stripping them of their humanity and conscience in order to brainwash them into carrying out their leaders violet demands without question.  It was frightening enough reading about this in fiction, but remembering that this happens in real life we truly terrifying.

Going hand in hand with the theme of war is that of trust. Due to the nature of the alien invasion, the humans have an impossibly hard time figuring out who they can trust. At the beginning of the story Cassie’s father gives her the simple advice, that the enemy is the person shooting at you. At the time I felt like it was quite good advice, but as the story progressed I realised that nothing is that simple. Throughout the novel all the characters grapple with concept of trust and struggle to figure out who they can actually trust.

Yancy also deals with the theme of colonisation in this novel. The alien colonisation of earth kind of reminded me of a reverse Avatar , in which the humans and the aboriginal people and the aliens and the colonisers. I thought that this was really clever, taking a coloniser population( ie Americans) and treating them as the colonised. It’s been almost universally acknowledged for some time now that colonisation is a terrible practice and can only be achieved by the dehumanisation and destruction of the native populace, which is exactly what happens in The 5th Wave. The colonisers do not respect the colonised and do not see them as equals, which is what enables their brutality.

The pervading emotion in this book is fear. Throughout the book I felt an overwhelming sense of fear and hopelessness, that all was lost and the aliens were unbeatable. They always seemed to be one step ahead of everything that Cassie and the others tried to do to take them down and I couldn’t help feeling like nobody was going to come out of this alive.

Cassie is undoubtedly a fantastic protagonist. She is extremely strong, clever and shrewd and looking for her little brother Sammy gives her something to live(or die) for. It is her sense of purpose that carries her through, and it made me wonder what she would have done had she not had him to fight for.

The only problem I would have had with this book is that the waves seem kind of illogical to me. These aliens are really clever , could they not have come up with something to just kill everyone in one go - or do they get some kind of perverted enjoyment out of the fourth and fifth waves. But I guess if they had figured out how to kill everyone in one go there would be no story. Feel free to correct me if I missed something important, but it seems like kind of a huge plot hole to me. Also there was a bit of insta-love, which always annoys me. Maybe people fall in love faster in apocalypse scenarios, maybe someone should do a study?

Overall this is a fantastic book. I would thoroughly recommend it to everyone, it definitely lives up to the hype.

Four and a half stars
Posted by Eimear Mulligan at 13:41