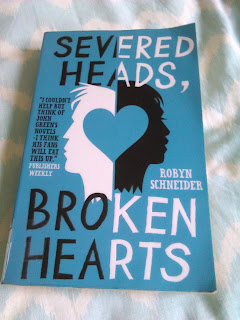 Robyn Schneider's book, originally titled Severed Heads, Broken Hearts is a witty and heart-wrenching teen novel that will appeal to fans of books by John Green and Ned Vizzini and novels such as The Perks of Being a Wallflower.
Golden boy Ezra Faulkner believes everyone has a tragedy waiting for them—a single encounter after which everything that really matters will happen. His particular tragedy waited until he was primed to lose it all: In one spectacular night, a reckless driver shatters Ezra's knee, his career as a jock, and his social life.No longer a front-runner for homecoming king, Ezra finds himself at the table of misfits, where he encounters new girl Cassidy Thorpe. Cassidy is unlike anyone Ezra's ever met— achingly effortless, fiercely intelligent, and determined to bring Ezra along on her endless adventures.Together, Ezra and Cassidy discover flash mobs, buried treasure, secret movie screenings, and a poodle that might just be the reincarnation of Jay Gatsby. But as Ezra dives into his new studies, new friendships, and new love, he learns that some people, like books, are easy to misread. And now he must consider: If one's singular tragedy has already hit and everything after it has mattered quite a bit, what happens when more misfortune strikes?With lyrical writing, nerdy humor, and realistic romance, Robyn Schneider's The Beginning of Everything is a story about how difficult it is to play the part people expect, and how new beginnings can stem from abrupt and tragic endings.

Severed Heads, Broken Hearts sat on my bookshelf and stared me down for a long time before I picked it up. I’m not completely sure it was worth my time in the end. I’m not sorry I read it, but I can’t help but think about all the other better books I could have been reading instead of this one.

SHBH reminds me of Paper Towns by John Green , and a lot of other YA fiction to be honest. In SHBH Schneider sets about dismantling the Manic Pixie Dream Girl, something Green does quite successfully in PT. The problem is Schneider doesn’t manage to pull it off the same way Green does. Ezra, the main character, was the golden boy of his clichéd high school in northern California. Cassidy, the MPDG, has a surname for a first name so obviously she is special af. Cassidy doesn’t give a shit about anything, but she’s horrendously clever, talented, spontaneous and of course, very beautiful. But most importantly she’s not like the other girls. In fact it is her “not like the others” ness that makes her the best!!! I’m actually just completely sick of this cliché, that you have to be weird and wonderful to be a love interest, that if you like sunbathing, lipgloss and trashy magazines you are vapid, shallow and deserving of the snotty debate girl looking down her nose at you. I’m tired of reading about this trope over and over again and I think  Cassidy might just be the straw that broke the camel’s back. I’m all for female empowerment and the right to wear men’s shirts and do public speaking, but that doesn’t mean you get the look down at the girls who choose not to. YA lit had better come up with something else to fill a book with because I’m pretty sure the genre is saturated with Cassidys.

Something that Schneider got right, however, is the whole idea of someone fixing you vs fixing yourself. I’ve always hated the trope of the main character being fixed by this cool new other person, because that’s not really a good example to set for young people. In the real world Cassidy isn’t going to come along and help you up, you’ve got to drag yourself up by your shoelaces. You can’t wait around for a saviour because you might be waiting forever. Ezra walks the fine line between fixing himself and being fixed by Cassidy, and it was quite interesting to see his development throughout the narrative.

Schneider also deals with the idea of tragedy, and how we are defined by and our lives are irreparably changed by events. Ezra loses his future, his friends and part of his identity when he injures his knee in a car crash that takes place before the book starts, and Cassidy experiences her fair share of life changing tragedy. This really resonated with me at the time because , completely coincidentally, I began reading this book just after the Berkeley balcony collapse in which six students were killed and countless others seriously injured. At the time I couldn’t help comparing the moments of tragedy experienced in the book to the students in Berkeley , whose lives were cut short or changed irreparably because they went out on a balcony to chat with friends or have a cigarette.

Schneider hit on a few interesting aspects of teenage dynamics as well. Usually in YA fiction all the cool kids are mean and the nerds a nice, but this was not the case in SHBH. Well all the cool kids are still mean, that’s a difficult trope to get away from, but not all the nerds are nice. I’ve always found this simplification of the social hierarchy in highschool a bit tiresome, and it was refreshing to see that the group of unpopular kids suffered from the same politics that the popular kids usually do. The relationships in this book are pretty good as well while we’re at it. Ezra and Cassidy’s relationship is pretty cute, but there’s nothing really new there. I loved Toby and Ezra’s relationship however. Toby and Ezra were friends as children, but they drifted apart as they grew older. However, when Ezra is in need of a friend with a bit more substance when he returns to school after the crash, Toby steps up to the plate and does a really great job. The other relationship I found really interesting was that of Phoebe and Luke, and Phoebe’s relationship with the rest of the group.

Schneider also touches on the idea of identity, and what happens when we lose what we feel is a large part of our identity through Ezra. Ezra is no longer the star tennis player, and when he can no longer play he feels lost, and not very like himself. He loses his friends and his main hobby, and no longer looks like himself. Instead of looking the perfect picture of health and athleticism, he looks skinnier and paler. Throughout the narrative he struggles to figure out who he is without tennis and his posse, how to fill his new spare time, his new image and his new future.

Even though this book had quite a few redeeming and interesting quality, I can’t help shift the feeling that I’ve read it before. If you’ve read a lot of YA fiction you can probably skip this one.