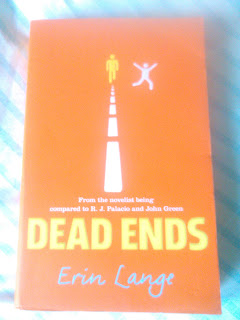 Dane Washington and Billy D couldn't be more different. Dane is clever and popular, but he's also a violent rebel. Billy D has Down's Syndrome, plays by the rules and hangs out with teachers in his lunch break.
But Dane and Billy have more in common than they think - both their fathers are missing. Maybe they'll just have to suck up their differences and get on with helping each other find some answers.

Dead Ends is the second book I’ve read by Erin Lange, and it reached all my expectations. I loved Lange’s first book Butter, and Dead Ends is a worthy follow up. In my opinion, Lange tells YA stories in a way that no other YA author that I’ve ever read does. She writes stories for teenagers similar to the way others write stories for adults, and doesn’t really pull any punches.

If I remember Butter correctly, the characters weren’t exactly likable. Well, the same goes for Dead Ends. None of the characters, especially the protagonist Dane, are very likable unlike other YA books. I feel like this is really important, through Dane we learned the reasons why someone could come across very unlikable, but ultimately is not all bad. Dane is definitely a bully, but instead of condemning him for his actions, Lange shows us his motivation for the way he behaves. I found this to be a really unusual perspective, as usually you get the point of view of the person being bullied.

Dead Ends is the first book I’ve read that deftly deals with Down’s Syndrome. Billy D. , Dane’s neighbour and eventual friend, has Down’s Syndrome, and through him we explore how people treat others with intellectual disabilities. Billy D. feels exactly like everyone else and doesn’t understand why he should be treated any differently. However we see the other characters struggle with how the should treat him. They try to figure out what allowances can be made for him, and what he can be held accountable for. They tread the line between condescension and understanding and compassion.

Lange also deals with the importance of parents and their relationships with their children. Dane doesn’t know who his father is, Billy D’s father is out of the picture. Conversely, Seely has two dads, and seems to be getting on well because of it. Through these relationships, or lack-of, Lange explores a father’s relationship with his children, the importance our society places on it, and the how important being accepted by him can be. Lange also explores the way parents, in this case mothers, protect their children in different ways. Both Dane’s mother and Billy D’s try to protect them by not telling them the whole story, and this does some harm as well as good.

My only gripe with the book is Seely, the required Manic Pixie Dream girl. She has short hair, wears boyish clothes, skateboards and knows how to fix cars. She’s just so different you know, she’s not like the other girls. It’s not that I don’t like her, but I’m pretty sure I’ve seen her a thousand times before.

Overall a really excellent book. Lange keeps up a high standard and I’m looking forward to reading more of her work.

Four and a half stars
Posted by Eimear Mulligan at 09:57