Where the Crawdads Sing - Delia Owens 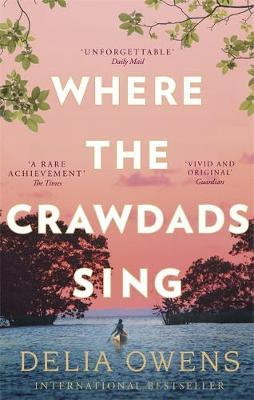 “Where the Crawdads Sing” is set in the marsh of North Carolina. It follows the life of Kya Clark, aka the Marsh Girl, from childhood into adulthood, as she deals with her abandonment as a young child and learns to survive in the marsh.

I found this book terribly sad. It was sold to me as a murder mystery, and it isn’t not a murder mystery, but the main themes of this book are definitely child abuse and neglect, isolation and survival. The beginning of the book gave me hardcore flashbacks to “The Rescuers Down Under”, a film I had forgotten existed but had so deeply traumatised me as a child I got literal chills after hearing the song “Someone’s Waiting for You” for the first time in twenty years. This is a tough book to read, for a lot of reasons, but I found the child abuse particularly upsetting.

The author, Delia Owens, is a nature writer by trade, and this is evident in the text. The book is beautifully fleshed out with descriptions of both the marsh environment, and the flora and fauna that inhabit it. As a result of this, the book is beautifully atmospheric and immersive. I’ve never been to the marshes of North Carolina, but the author does such a good job of grounding the story in it’s setting, I sort of feel like I know the place.

There’s a couple of solid tropes in here that are sort of lazy, but thankfully they don’t ruin the book. Kya is your typical “doesn’t know she’s beautiful” innocent audience insert lead, and Tate, Kya’s love interest, is a Connell Waldron-style idealistic “sensitive man”.

I’m not sure if “Where the Crawdads Sing” was an enjoyable book. I found the first third difficult to get through but once Kya began to hold her own in the marsh the book became easier to read. I almost didn’t care about the murder mystery element of the plot, I just wondered what would happen to Kya. The ending is anticlimactic, but maybe after her action packed life it’s the ending Kya deserved.